media artist from Stuttgart takes photographs of people’s faces all over the world. At last count (September 2006) his database contained just about 20.000 portraits of people from various countries in Europe, and from Japan, Korea, and Zambia-and the number continues to grow. Helzle pursues the question that has moved him for a very long time: “How can I understand the relationship between myself as an individual and all of humankind, these six billion human beings?” The question originates from 1963, the year in which the first photograph of our planet was beamed to Earth by a satellite. This opened up a space for the public at large beyond all previously known boundaries. And our familiar relationships to the family, to work, to the town, region, and country we live in, etc., were extended by precisely this question. What does it mean to be one six-billionth of the world’s population? How can I picture humankind in its entirety? How does this affect my life in a practical way?
It is not enough that the economy, technology, terrorism, etc., have taken hold of this space; it is advisable that we work out ideas about how we deal with it as individuals. This “global” space contains opportunities and potentials that do not exist within known (national) boundaries. And because artists are responsible for images…

Wolf Nkole Helzle is participating in the media art project 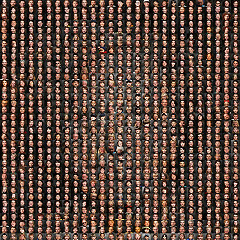