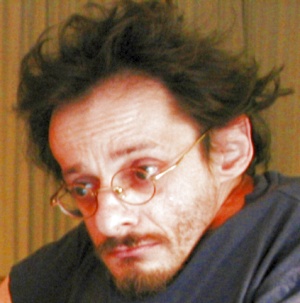 Discovering electronic media at the end of the 1970’s, Arie van
Schutterhoef (1957) started to explore the potential of the mutual
relationships between text/sound/image. It has been his main pre-occupation
to develop his ability to use this. Important was to understand how
language works and from that point onwards the interest in sound came and
the need to know how to apply it. Which resulted in a series of electronic
and electro-acoustic compositions with or without acoustic instruments.
These works were performed in several countries in Europe.

During the 1990’s an increase in attention for image lead to the
collaboration with the visual artist Clea Daiber, resulting in the creation
of videos, which were shown at several venues inside and outside the
Netherlands. At the beginning of 2000 the step was taken to do this
independently.

His video-work (collaboration with Hans van Eck) was selected for the ‘7th
International Festival of New Film’ (2002), Split-Croatia in the new media
section. Participated in the Sasa International Award 2003 festival in
Catania, Italy – organised by the United Nations – in the category Digital
Wave for experimental movies and video-art”. Also appeared in “Slowtime?
…. Quicktime as an artistic medium”, as showcase of streaming media art
works at the at the new space of “Cinema_B” on 17 December 2003, organised
by Agricola de Cologne, experimental platform for net based art.

Besides being involved with the Schreck Ensemble, he is also coordinator
for the Interface Design of the Working Group Interactive Systems and
Instrument Design in Music in the International Computer Music Association
(ICMA) and been artistic advisor for the Netherlands Electro-Acoustic
Repertory Centre (NEAR).