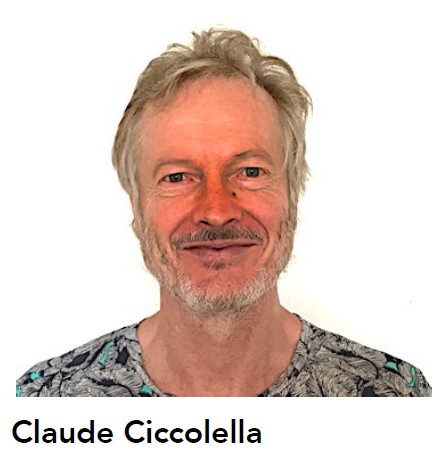 Claude Ciccolella
was born in 1959 in Paris / France. From 1981, he studied physics, oceanology, automation and computer science at the Universities of Marseille until his doctorate in marine biology and the automation of aquaculture stations that he did not end up disagreeing with his thesis supervisor.

After working on a computer network for a pharmaceutical company in Paris, he turned to sculpture, monochromes and in 1998 video.
At the end of the 1990s, he proposed a thesis outline at the Sorbonne / Paris on monochrome, the dean did not know in which specific field, philosophy, history of art or visual art, his thesis could be supervised.

In 2000 he created the Festival Images contre nature, the international festival of experimental videos in Marseille, as curator and programmer, festival that will last 18 years, with programs, animated, space, identity, long, movement, perception, meaning and time, programs resulting from the analysis of the moving image.

From 1999 to 2021 he produced around thirty short and feature-length videos, videos that would be shown in festivals, museums, TV and exhibitions. He also works with theater directors, comedians, musicians, visual artists.

From 2010, he participated in the creation of the Théâtre des Chartreux / Marseille. He will become sound and light manager for 7 years.

In 2018 his installation Quadriptych 12.08.02, on entropy, antimatter, string theory, was shown at Superior School of Art of Aix-en-Provence / France.

For 2 years, from 2019 to 2021, he became a college and high school physics-chemistry teacher.
His work has as theme disappearance, color, matter, entropy, antimatter, string theory, improvisation, existentialism; an adventure of audio-visual creation.